With even hard-hit states like New York allowing businesses to bring their stores back to life, Americans are wrestling with one of COVID-19’s most painful tradeoffs: a damaged economy with millions out of work because of public health measures put in place to slow the spread of the virus.

And most Americans do think the public health risks of reopening the economy are still important to weigh. But there is also growing evidence that several months of economic hardship have changed the way some people are evaluating the costs. According to a new poll from the American Enterprise Institute conducted from May 21 to June 5, 41 percent of Americans say the government should allow businesses to open back up even if it means putting some people at risk, up from 22 percent in late March.

But not all Americans are anxious for businesses to reopen. In fact, there is a fairly stark divide among white, black and Hispanic Americans in their responses to this question. Black Americans, in particular, still overwhelmingly favored keeping businesses closed. The AEI poll found that 82 percent of black Americans said it’s better for the government to take all necessary steps to ensure the public is safe, even if means keeping businesses closed for longer and hurting the economy, while only 16 percent said that businesses should be allowed to open back up if some are put at risk — a finding that was basically unchanged since March. A solid majority (65 percent) of Hispanic Americans also thought public health needs should come first, although that has fallen from 81 percent in March.

The share of white Americans who prioritized public health over the economy has plummeted, however, from 76 percent in March to 50 percent now. In the June survey, nearly half of white Americans (49 percent) thought the government should reopen the economy, even if it means putting some people at risk. 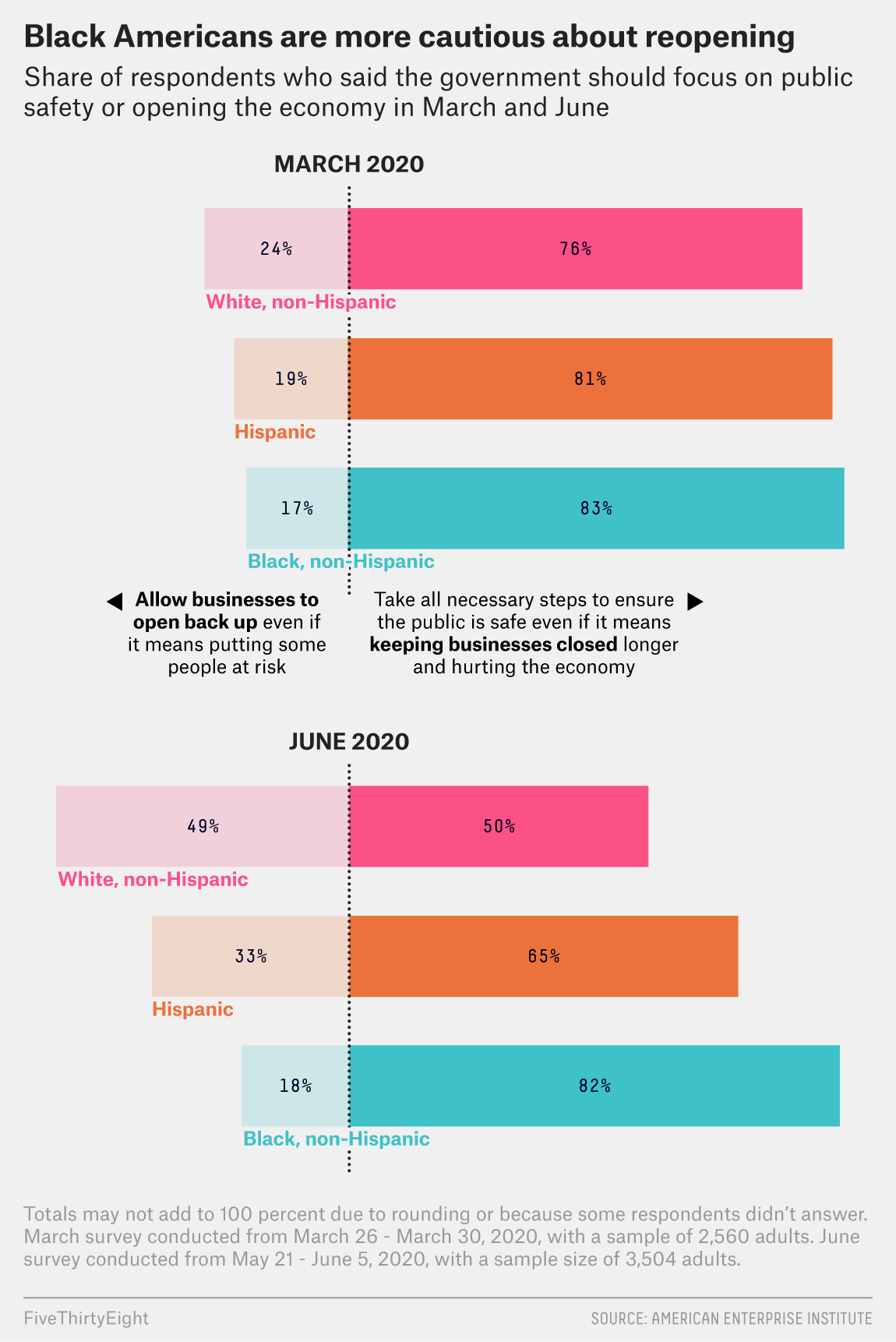 Other polls have found a similar trend. According to an Economist/YouGov poll conducted from June 7 to 9, only 8 percent of black Americans said it’s safe right now to reopen the economy nationally, compared to 15 percent of Hispanic Americans and 25 percent of white Americans. And as the AEI survey underscores, huge racial disparities exist within the COVID-19 pandemic — with black and Hispanic Americans bearing the brunt of both the health and economic consequences of the virus. The public health crisis is particularly acute for black Americans, who are dying of COVID-19 at a much higher rate than either white or Hispanic Americans. In interviews, black Americans who participated in the survey spoke to those concerns, telling us that their desire for a government approach that prioritizes public safety isn’t reflected in many states’ plans. Some even said they’re afraid that more people may die as a result.

Dominique Anderson, 30, said he’s been alarmed to see his home state of Texas allow restaurant occupancy levels to increase, even though case counts have been spiking. “I don’t think it’s safe, how we’re going about [the reopening of the economy] right now,” he said. The topic was particularly emotional for him, he added, because a close family friend had died of COVID-19 only a few weeks earlier. “I understand that this is threatening people’s livelihoods — I know a lot of people who have lost their jobs,” he said. “But I fear that reopening so quickly is going to cost more people their lives.”

The AEI survey showed that Anderson’s experience is far from unique, particularly for black Americans, who were more likely than white or Hispanic Americans to know someone who has tested positive for COVID-19. As the table below shows, a majority (54 percent) of black Americans reported that they or someone they know personally has tested positive for the virus, compared to 46 percent of Hispanic Americans and 40 percent of white Americans. And a series of AP/NORC surveys conducted between April and June found that black Americans were much likelier than white Americans to report that someone close to them had died of COVID-19.

[Related: How Americans View The Coronavirus Crisis And Trump’s Response]

It’s not hard to see why black Americans would have a bleaker outlook on the trajectory of the virus, either. In addition to being more likely to know someone who tested positive for COVID-19, they are also bearing the brunt of the economic hardships that have resulted from the shutdown orders. According to the survey, black and Hispanic Americans were substantially more likely than white Americans to say that since February, they’ve fallen behind on rent or bills, had problems paying for food, withdrawn money from a savings account or 401k or borrowed money from family or friends.

What’s more, the survey found that black and Hispanic Americans were less likely than white Americans to have said they had an emergency or rainy-day fund that would cover their expenses for three months, leaving them particularly vulnerable if they suddenly lost their jobs or became sick. But the survey also found that the pandemic is forcing black Americans who do have savings to spend down their bank accounts at a much faster rate than white Americans. Almost half (48 percent) of black Americans said they’ve spent at least half of their rainy day funds over the past few months — including 19 percent who said they’ve spent their entire emergency savings account. Only 12 percent of white Americans, by contrast, said they’ve spent down at least half of their emergency fund, and only 3 percent said they have spent all of their rainy-day savings. 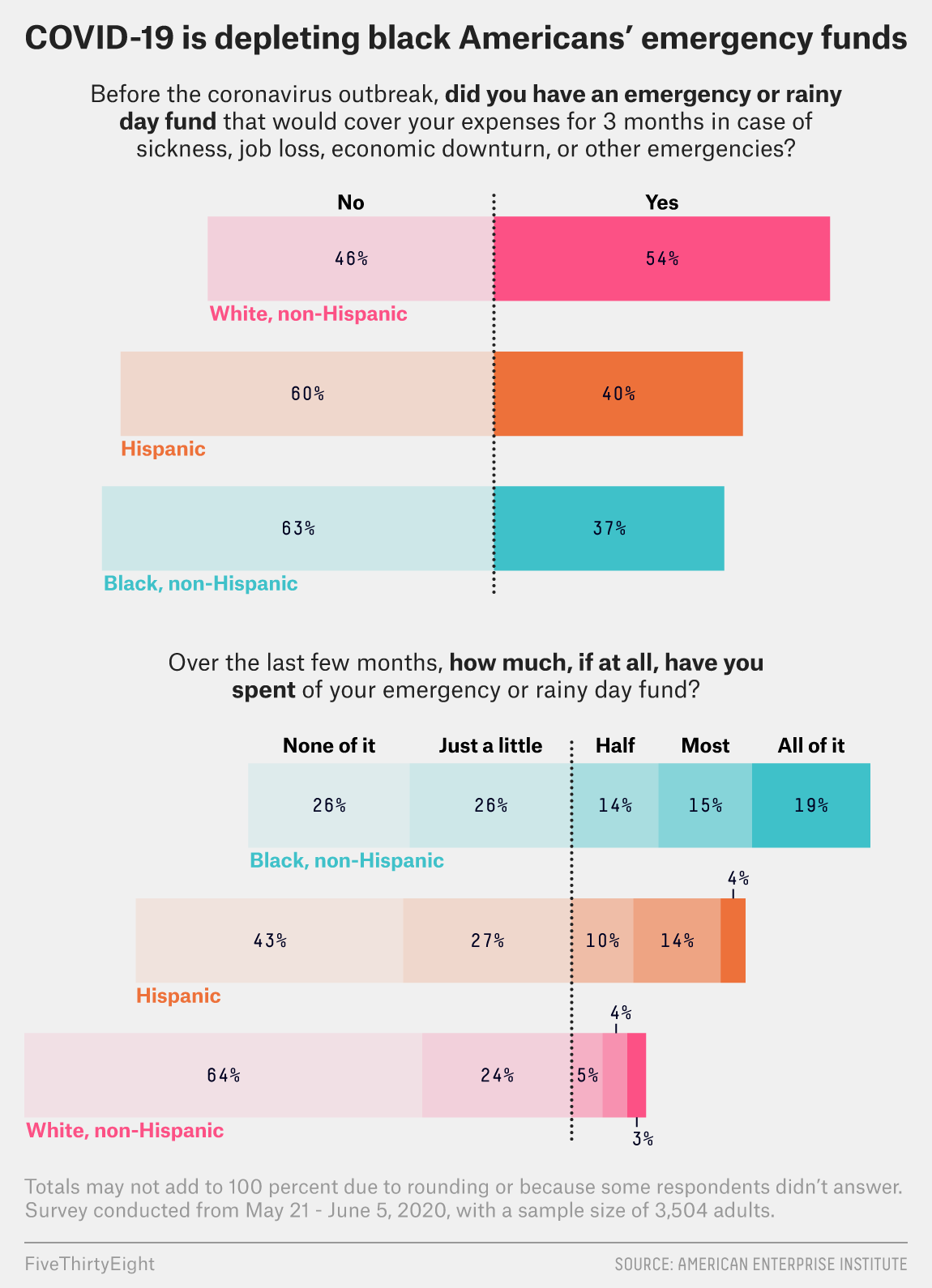 And black families are facing other kinds of stress. The survey found that 28 percent of black parents with children under the age of 18 said that child care responsibilities have been very difficult for them to handle during the COVID-19 pandemic, compared to 18 percent of Hispanic Americans and 8 percent of white Americans. One respondent, who asked that his name be withheld, said that figuring out schooling for his two small children while juggling lost income and trying not to visit stores has been unbelievably stressful. “You’re just living in this state of uncertainty, feeling very vulnerable,” he said. “What if I lose my job and can’t support my family? What if I get sick? What if my kids don’t go back to school in the fall? It all feels possible right now.”

In general, black Americans thought it will take longer for life to get back to normal. In the survey, many black Americans said they were very uncomfortable with the idea of returning to many everyday activities that involve close contact with other people — like going to church, a nail salon, or a movie theater.

And a solid majority (61 percent) of black Americans said that life in the U.S. will not mostly return to normal before the end of the year, compared to 53 percent of white Americans and 49 percent of Hispanic Americans. That could be because they have a particularly negative view of how the federal government and President Trump are handling the COVID-19 outbreak.

“We don’t have the leadership,” said Gregory Coney, 57, who lives in Massachusetts. “The response is about fighting and power and not [about] doing what we need to do to protect people.”

Jordan, who is particularly nervous about her own health because she has asthma, said she understands why some Americans want to mitigate the economic damage — she feels lucky to still have a paycheck. But she told us that even though she also doesn’t know someone who tested positive for the virus, she sees that as luck, not something she can count on going forward. “I really don’t think we should be messing around with this disease,” she said. “And yet everyone is out and about. I’m worried we opened up too soon. If I’m being honest, I’m more fearful now than I was before.” 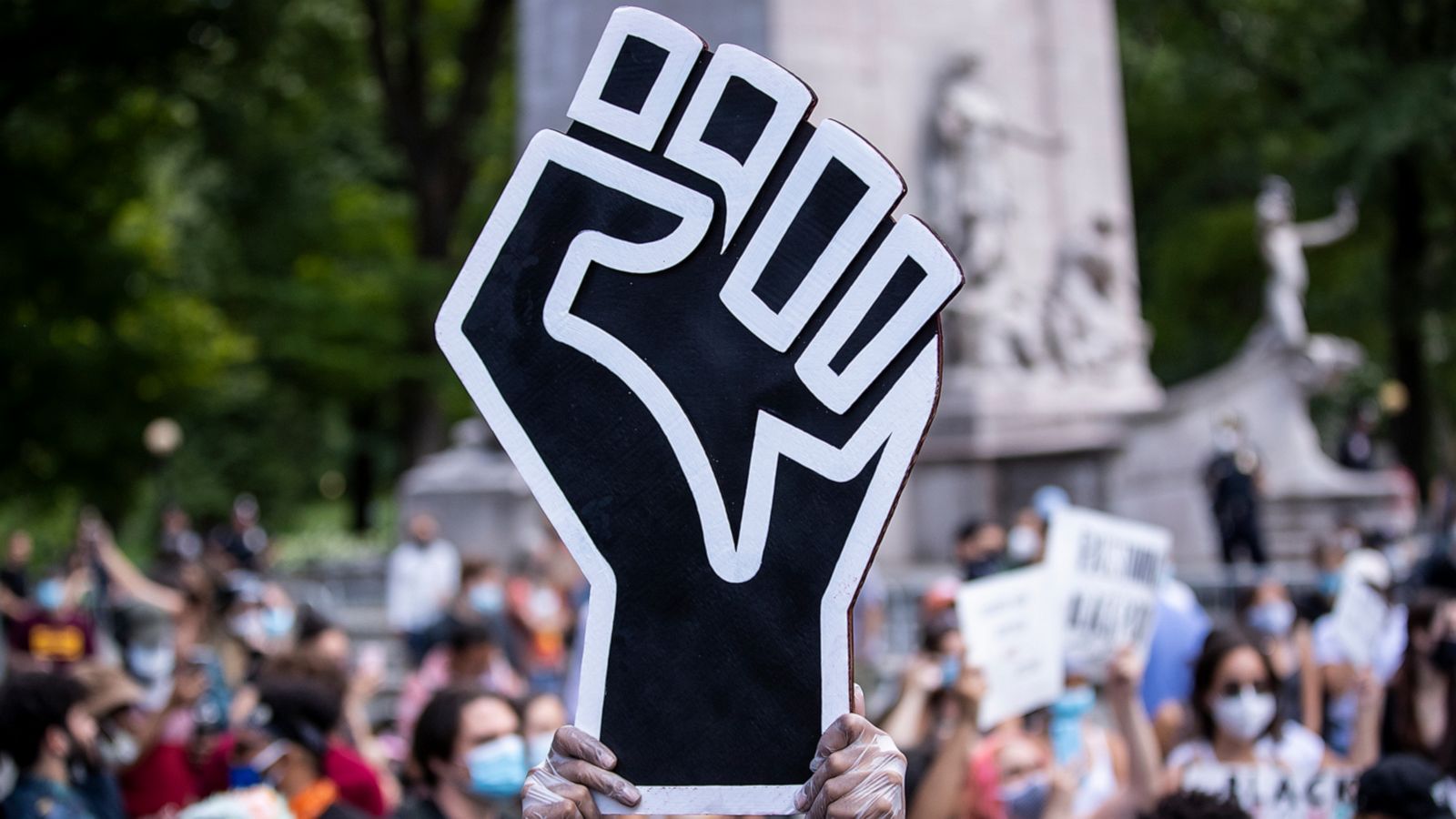 Quelle Surprise: NYT Article on U.S. Contact Tracing Deficiencies Doesn’t Fall for Big Tech’s Claim that Effective Contact Tracing Requires an App, But Fails to See What Good Health Care Has to Do with It