What Economists Fear Most During This Recovery

As states push forward in their phased reopenings, we’re getting clues that the beleaguered U.S economy might be on its way to recovery. Retail sales spiked by 17.7 percent in May, and the unemployment rate unexpectedly dropped in that month as well — suggesting that Americans were returning to work and opening their wallets earlier than many expected. But experts still think that even if things are starting to look up now, we shouldn’t assume we’ll be back to normal anytime soon. In fact, economists think there are still significant economic risks despite the tentative rebound, including a second wave of COVID-19, an unwillingness to spend from consumers and an absence of an additional fiscal stimulus from Congress.

In partnership with the Initiative on Global Markets at the University of Chicago Booth School of Business, FiveThirtyEight asked 34 quantitative macroeconomic economists what they thought about a variety of subjects around the coronavirus recession and recovery efforts. The most recent survey, which was conducted from June 19 through 22, echoed many of the predictions from the last round — though there were also a few new wrinkles in their forecasts.

When we first asked about the shape of the recovery, 58 percent of respondents thought the trajectory of future U.S. gross domestic product looked like a Nike “swoosh” — a sharp downturn followed by a long, slow recovery. This time around, however, a consensus has formed around a slightly different shape: a reverse radical (i.e., a mirrored version of the square-root symbol). 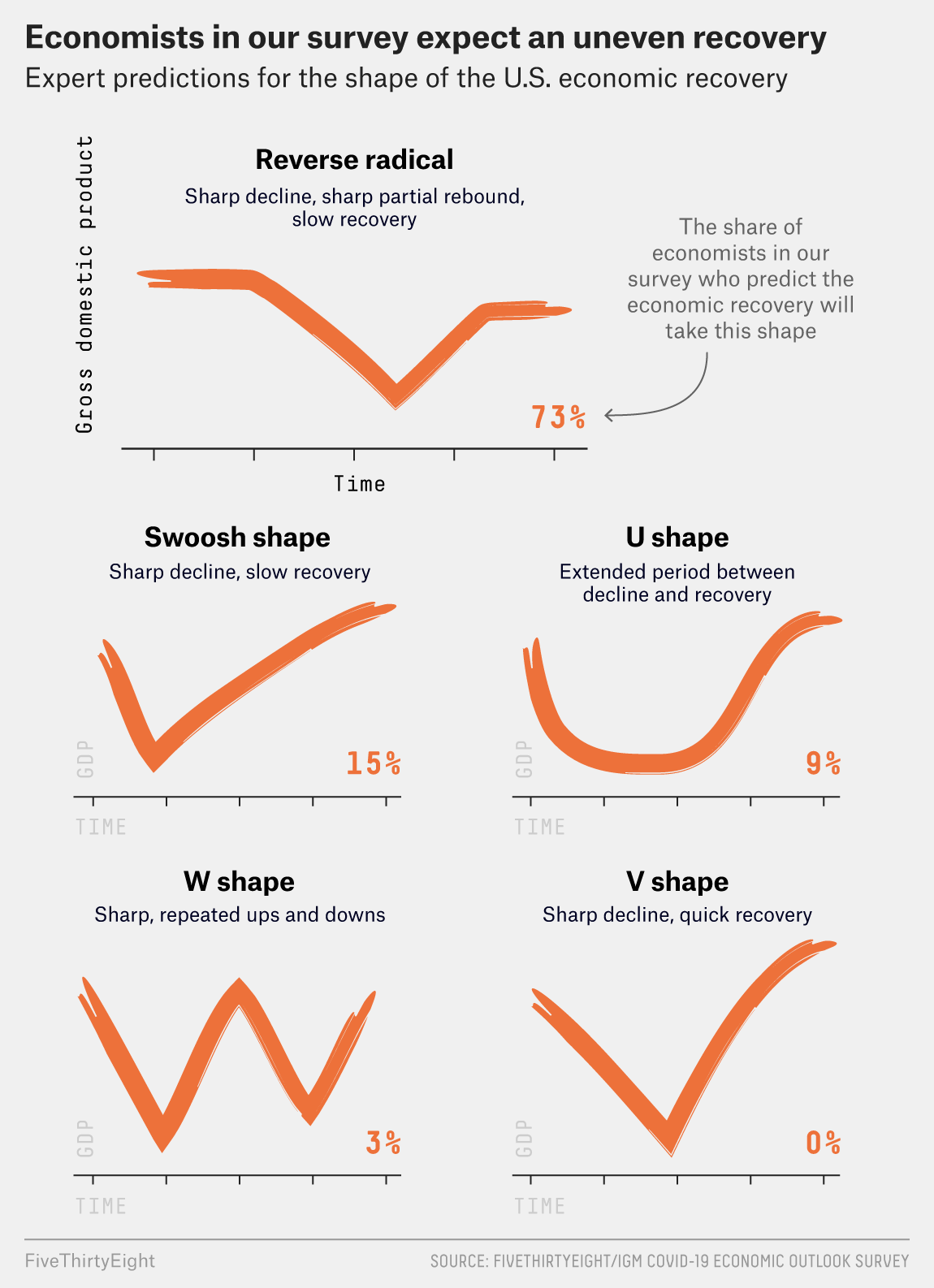 This shape — which 73 percent of our economists predicted for the country’s economic future — implies a steep drop followed by a quick partial recovery and a longer period of slower, mixed growth. But it isn’t necessarily an improvement over the swoosh. “There is nothing standard or smooth about this recovery,” said Lisa Cook, professor of economics and international relations at Michigan State University. In her view, a reverse-radical-shaped recovery could be shaped by a spike in infections and hospitalizations, a wave of bankruptcies as unemployment benefits expire or consumers’ unwillingness to return to gyms, nail salons or other parts of their routine. That could make the bounce back from this recession bumpier than previous recessions.

Twelve of the 17 economists who had predicted a swoosh in our survey in late May changed to the reverse radical this time, leaving just five respondents sticking with the swoosh in this round of the survey. (And no economist switched to the swoosh, another sign that other patterns fit the trajectory of this economic recovery better.)

“By now, the partial reopening of the economy, along with the new unemployment and retail sales numbers, suggest a substantial bounce-back effect for the economy,” said Allan Timmermann, professor of finance and economics at the University of California, San Diego, who has been consulting with us on the design of the survey. “However, our panel is not convinced that this recovery will last, since they did not opt for the V-shaped recovery — in fact, it is interesting that not a single person opted for the V-shape.”

Overall, the surveyed group didn’t meaningfully budge on its projections for either GDP or unemployment from the last time we asked. Nor did it change its long-term timeline for when GDP might return to its pre-coronavirus benchmark. Maybe it’s encouraging that the projections haven’t gotten worse — but the panelists still think it’s unlikely (33 percent probability) that GDP will creep back up to where it was in the fourth quarter of 2019 any time before the first half of 2022.

In a new question this round, we asked respondents what factors might bring about their worst-case predictions for fourth-quarter GDP growth. Perhaps unsurprisingly, the average participant gave the most weight to the possibility of a second wave of coronavirus later in the year. But their next-most-significant fears were economic in nature: whether consumers would be unwilling to spend even after businesses open and whether Congress would choose not to pass further economic stimulus packages:

We also cannot understate the weirdness of these economic times. This led to a few other noteworthy results in our survey, starting with very high projections for the personal saving rate, which ballooned to a record 33 percent in April. (In that metric, saving is expressed as a share of disposable personal income.) Our group of economists doesn’t think it will stay quite that high going forward, but the respondents did predict a mean saving rate of 20.2 percent in June with an 80 percent confidence interval ranging from 13 percent on the low end to nearly 29 percent on the high side. To put that in context: According to data going back to 1959 from the Federal Reserve Bank of St. Louis, the U.S. personal saving rate had never been higher than 17.3 percent before the coronavirus and had seldom gone into the double digits since the early 1990s.

Gloria Gonzalez-Rivera, a professor of economics at the University of California, Riverside, told us that she didn’t think the June saving rate would match April’s simply because Americans had fewer opportunities to spend their money at the height of the state-level lockdowns. But she added that she still expected consumers to be “conservative” in June. 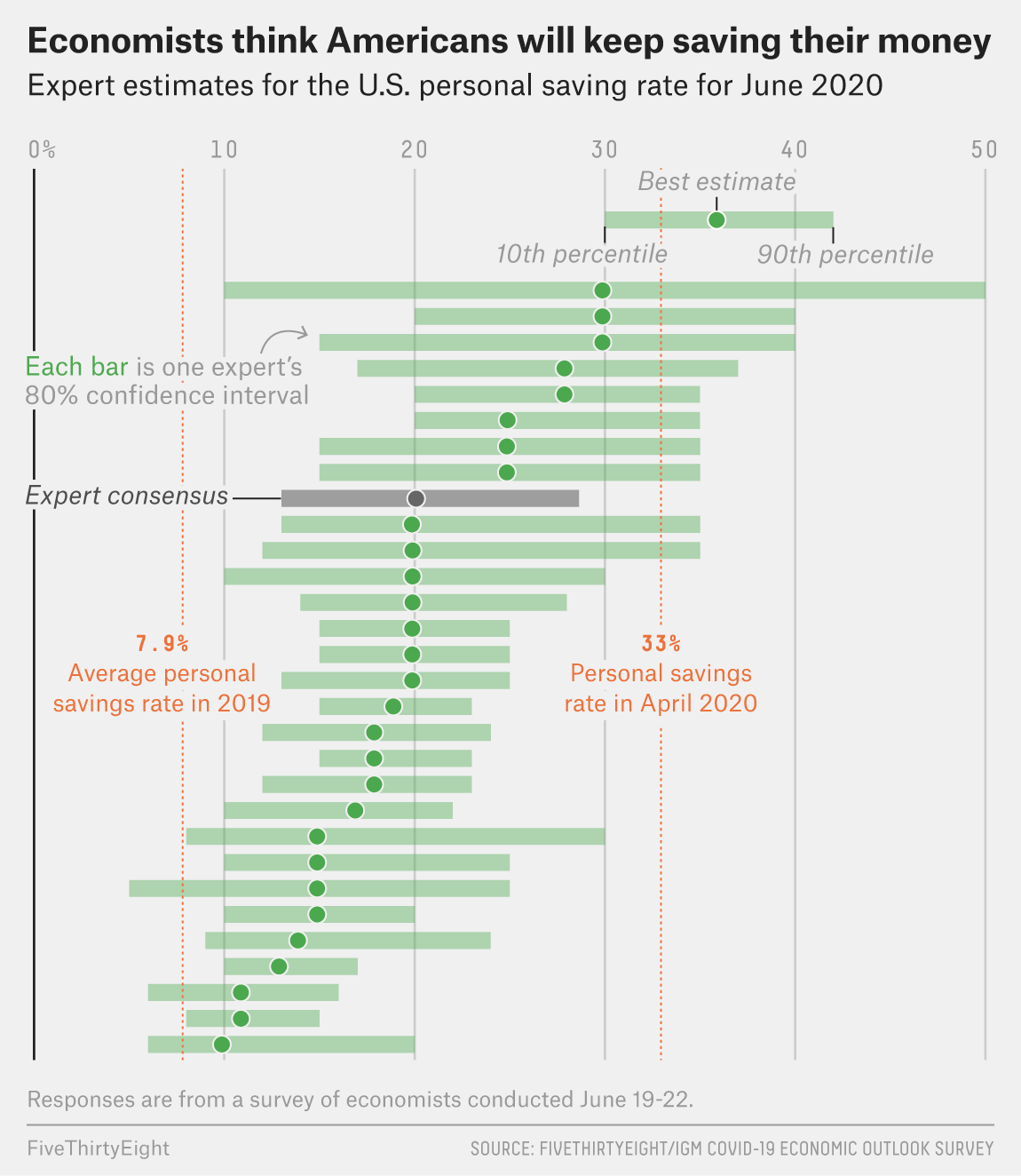 “A high savings rate is a sign that consumer confidence is low and spending is going to be low,” said Jonathan Wright, an economics professor at Johns Hopkins University who, along with Timmermann, has been guiding the design of the survey. “My spending is someone else’s income. So when people start to save a lot, that really slows down the recovery.”

The unusual nature of this recession also showed up in our respondents’ prediction for which investments might deliver the highest return over the rest of the year. As we wrote about last week, the stock market has been busy regaining most of its initial coronavirus-related losses since late March, even as the rest of the economy sits in a very tenuous place. Our panel generally thinks that disconnect between the stock market and the broader economy will continue. When given the choice among three investments, the panelists thought there was a 45 percent chance that NASDAQ — with its heavy emphasis on tech stocks — would perform best, followed by the S&P 500 at 34 percent. The economists thought there was just a 21 percent chance that 10-year U.S Treasury bonds, traditionally a safe haven in an environment of uncertainty and low corporate earnings, would provide the highest rate of return by the end of 2020.

Overall, the economists in our survey think the economy has a long way to go before it returns to normal. Much of its path from here will hinge on the state of the virus itself, with additional emphasis on the government’s response. But the panel also sees many of the stranger features of this particular recession continuing to some degree — from the stock market’s disconnect with the rest of the economy to the extraordinary levels of personal savings by Americans. And of course, the error bars around the forecasts remain wide — as befits one of the most unpredictable economic moments in recent history. 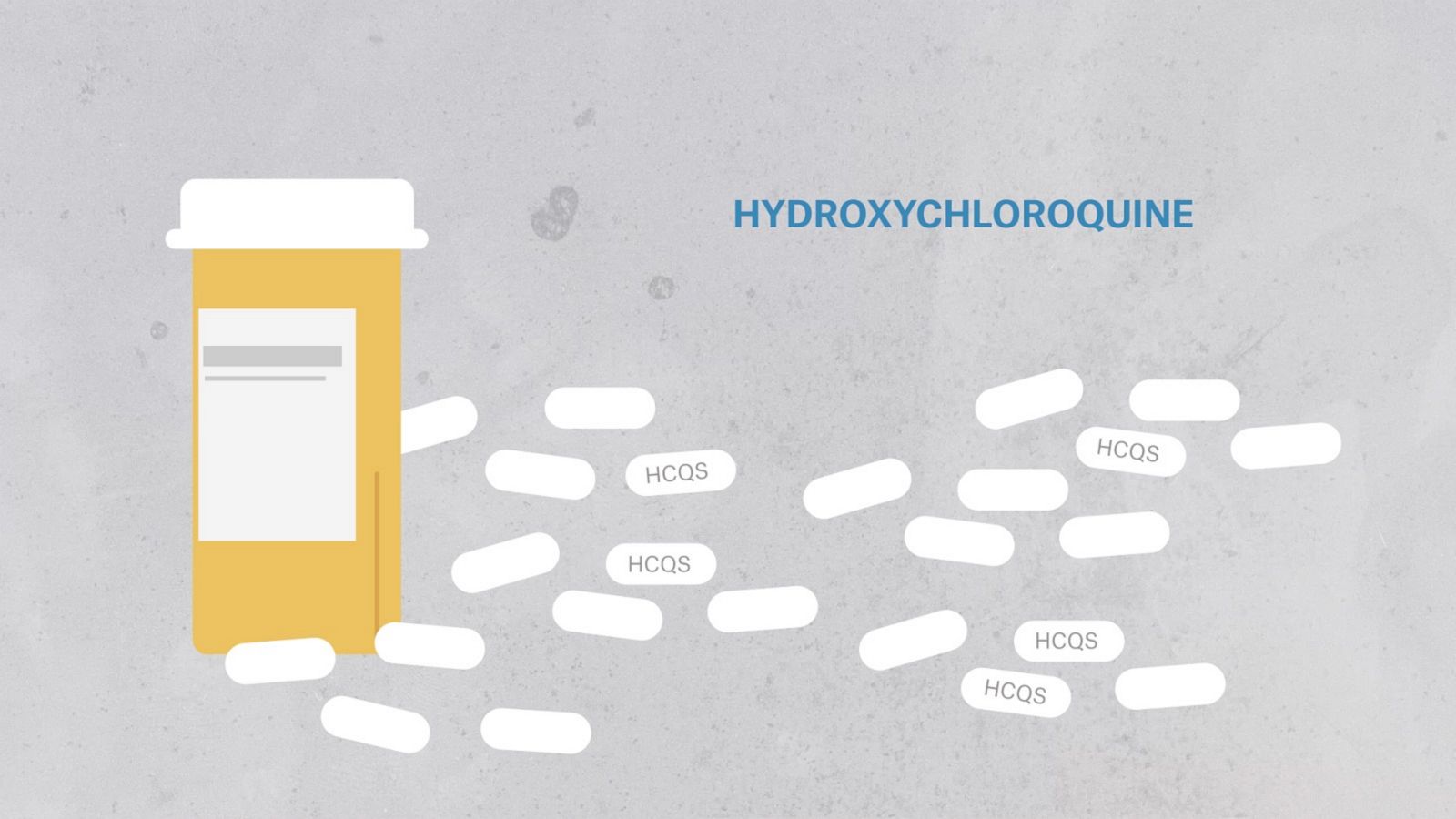